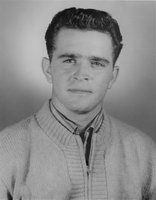 Obituary Roger Charles Lainson, 77, died on November 7th, 2019 of natural causes. Roger was born in Council Bluffs, Iowa on July 29th, 1942 to Charles Sheldon Lainson and Frances Opal Lainson (née Donnelson). Throughout his life Roger wore many hats and was beloved by many. As a member of the United States Army, he was stationed in Greece. In 1968, while diving into a pool, Roger suffered an injury which resulted in Quadriplegia. It is through his injury that he became involved with the Great Plains Paralyzed Veterans of America (PVA) and served as Chapter Director from 1971-1987. While there Roger helped enact legislation and completed many projects to improve the lives of paralyzed people. In addition to his work with the PVA, Roger was a devoted husband and father. Roger will now walk in Heaven with his parents Charles and Frances as well as his brothers William and John "Mickey" Lainson and sisters Patricia Sloan and Charlyce Hannon. He is survived by his wife, Susan Jean Lainson (née O'Donnell), children: Troy, Ryan, Cyle, Justin, Joseph, Rachael, and many grandchildren. As well as his three brothers Terry, Rennie, and Mark Lainson. His life will be celebrated on Nov 17, 2019 at his home in Tucson, AZ. To send flowers to the family or plant a tree in memory of Roger Charles Lainson, please visit our floral store.