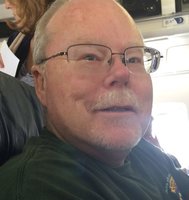 Obituary Michael Dale Engstrom Sr. (1958 – 2019) Michael, 61, passed away peacefully in the arms of his loving family Wednesday, June 26, 2019. Michael was born June 12, 1958, in Canton, Ohio. He graduated from Paradise Valley High School in Phoenix, Arizona in 1976 and joined the United States Air Force in 1980. Mike “Doc” retired from the United States Air Force in 2000 after 20 years of service as a flight engineer on MH-53, C-141, and EC-130 aircraft. He was a veteran of Desert Storm. He transitioned to medical school after the military, where he obtained his degree as a Physician Assistant. He served the military community as a PA until his eventual retirement. He is survived in life by his wife of 40 years, Dawn; his two sons and daughters-in-law Michael Jr. (Crystal) and Matthew (Araceli); six grandchildren (Alexander, Sedona, Delainey, Uziel, Camilla, and Mateo); and brothers Arthur and Lewis. He was dedicated to family and friends and was always ready to share stories about his wife, sons and grandchildren. He enjoyed hiking with his dog, RVing, and in his younger years, riding dirt bikes. Mike was an amazing husband, father, son, brother, grandfather, and uncle and will remain eternally in the hearts of his family. Do not mourn his departure but smile as he embraced his new life with his Savior. We will miss him, but we will see him again. The family asks in lieu of flowers or gifts that donations can be made in his name to the Leukemia & Lymphoma Society To send flowers to the family or plant a tree in memory of Michael Dale Engstrom, Sr., please visit our floral store.