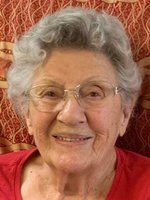 Mrs. Lila Mae Strong of Tucson, Arizona, passed away peacefully on her 94th birthday, December 1, 2020 at The Center at Tucson.

Lila was born on December 1, 1926, in Hastings, Oklahoma, the daughter of the late Thomas and Bessie Rodgers Gray.

She was preceded in death by her husband of 55 years, Howard Lee Strong, her companion of 19 years, Jerry Seeger, her daughter Katy Steele Deutermann, son- in- law, Robert C. Steele and one brother, Thomas Gray, Jr.

Lila spent many years in Kansas City, Missouri, where she was a surgical nurse at St. Joseph's Hospital and Liberty Hospital and was a member of St. Charles Borromeo Catholic Church.  Lila and Howard traveled after retirement in 1990 and settled in Tucson in the early 90's.  She was a parishioner of St. Pius Catholic Church in Tucson.

A memorial service will be held at Resurrection Cemetery in Kansas City, Missouri, in the Spring of 2021.

Memorial contributions can be sent to Hospice Foundation of America at https://hospicefoundation.org